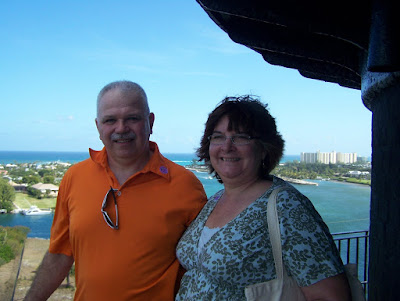 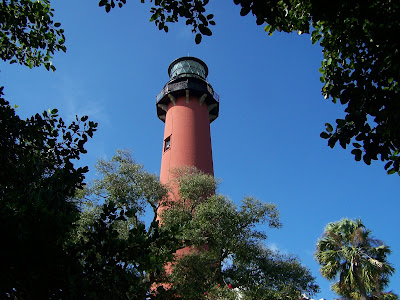 Today Fred and I found ourselves at the top of the Jupiter Inlet lighthouse in Jupiter Florida.
Fred loves lighthouses and we have searched out many for him over the years. When we decided to make this trip to South Florida, we tried to include a few more.
The Jupiter lighthouse is a beautiful dark red brick tower that sits at the Jupiter inlet to mark dangerous shoals that were once hazards to Gulf Stream boat traffic. It's beautiful coloring and easy access made it a must see for our trip.
It is located in Lighthouse Park located just off A1A and is clearly visible from the road.
The lighthouse is operated by the Loxahatchee River Historical Society which maintains a museum at the site and offers guided tours of the Lighthouse itself.
We had the good fortune to meet Red at the top of the lighthouse. He has been a volunteer docent for many years and he shares Fred's love of lighthouses and Civil War history. We were lucky enough to be in a small group so had a lot of time to talk with him.
The lighthouse was lit in 1860 but was made dark shortly thereafter when Confederate sympathizers stole the working portions of it and buried them until the end of the Civil War.
Jupiter Inlet Lighthouse also played an important role during WWII when a secret operation was set up there to intercept the radio transmissions of German U-boats. During the Summer of 1943 67 German submarines were destroyed due to their efforts.
Today the lighthouse remains an active aid to navigation and while owned by the Coast Guard it is maintained by the Historical Society.
Tomorrow morning we plan to take a closer look at the Hillsboro Inlet Lighthouse .
We will then head south to Key West.
Posted by Happileerving at 6:27 PM