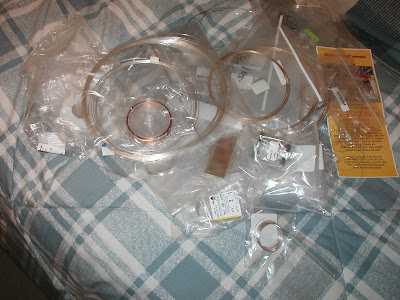 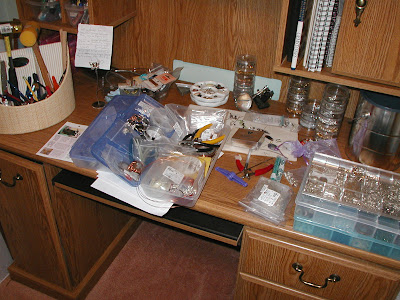 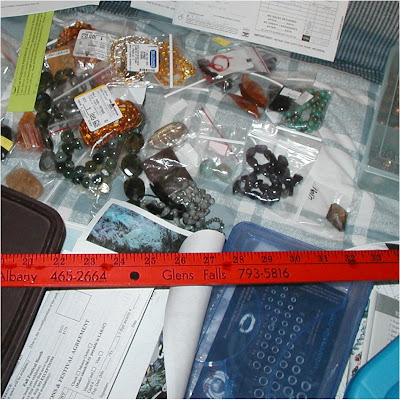 I have been shopping. The holiday season depleted my supply of jewelry and my supply of supplies. I have gone a little wild in order to replenish the stock . It has made a mess of my studio room. It is piled high with boxes and packing slips and shipping materials.
There is wire. Lots of shiny beautiful wire in multiple gauges and colors including sterling silver, gold filled and copper.
There are gemstones. Amethyst, amber, agates, jaspers, turquoise, citrine, carnelian, onyx, obsidion, quartz, garnet, jade and labradorite.
There are glass beads and metal beads and wood beads. There are jump rings and clasps and spacers.
There are cutters and pliers and boxes and a ring mandrel.
It's a mess. Its my beautiful mess and not much makes me happier than sorting and organizing, matching stones to wire. There are so many ideas swirling in my head . I need to start writing them down so I don't forget. I wish that my hands could work as quickly as my brain.
Posted by Happileerving at 6:41 PM No comments:

Bubba and the Tramp 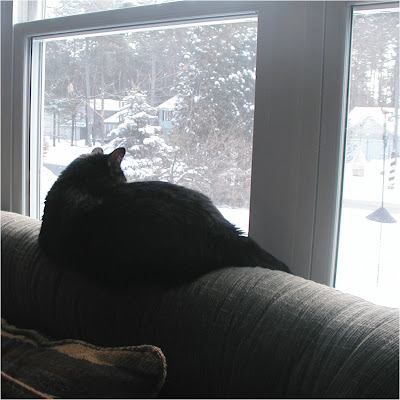 Our poor little Bear has had his heart broken. Several months ago a beautiful little hussy showed up on our front porch meowing and rubbing our ankles. She was black and white with lovely markings although she looked a little bedraggled from being out doors. We gave her food and water on the porch and she ate ravenously. She slept on the porch chairs and insisted on being fed twice a day but would not accept our invitations to come inside. She and Bear had quite a relationship--but only through the screen door. He inviting her in, she trying to entice him outside.

December came and with it some very cold weather and snow. One day as I was leaving for work she ran inside. She warmed herself by the fire, she enjoyed sleeping on a soft bed, we treated her for fleas. She warmed our laps, purred and preened, and she gave Bubba ear mites. A week later as I was taking the garbage out she bolted. She returned a few days later only to leave again after warming up for a couple of days. We have seen her a few times in the neighborhood but she doesn't come to visit anymore.

Bear keeps waiting . Our Bubba sits on the back of the couch and watches for the little minx to return.

Posted by Happileerving at 6:56 PM No comments: 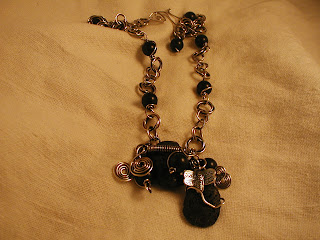 Today was spent in our weekend storefront At The Warehouse is Albany New York. It was a very interesting day and Becky and I met several new visitors to the Warehouse. They had heard of us from a variety of sources The Chronogram, local advertising and referral from a friend. It seems that the word is getting out and our place is growing in popularity. We are happy to see the interest and continue to encourage anyone that likes a positive atmosphere, good music, great specialty foods and locally made hand crafted goods sold by the artists to join us. You will be glad that you made the trip.
I have been working on some new pieces this week that showcase a new chain design that I came up with. It is created with 3 different styles of rings. The pendants are made of turquoise and lava stone with sterling silver wire, spirals, and charms. The end result is a rather bohemian looking gypsy style. I would love to hear some feedback on this one.
Posted by Happileerving at 6:13 PM No comments: 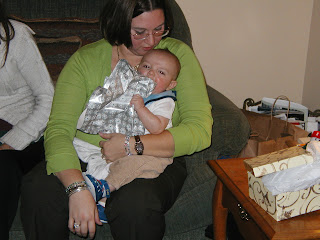 Happy New Year from all at The FamiLee Jewels.
Looking back at 2007 I am amazed at what has transpired in our lives--both business and personal.
The FamiLee Jewels has grown from 5 artistic women exploring a new art form. We now have a shared vision.
The Jewels have been on the road this year sharing our unique jewelry in a number of craft shows and local venues. We exhibited at LARAC in Glens Falls, The Empire State Plaza in Albany, The Brookside Museum in Ballston Spa, Goulds Orchards in Schodack, The Lasalle Institute in Troy, and two local hospitals The Stratton VA Medical Center in Albany and Samaritan Hospital in Troy.
The FamiLee Jewels has a website that showcases our jewelry. We have an ETSY site where our jewelry is sold in a place that is committed to offering quality handcrafted artisan goods. Most amazing to me......The FamiLee Jewels is a storefront. We have a beautiful store At The Warehouse in Albany New York where we are open to the public every weekend. The warehouse is full of local artists that sell their handcrafted goods in an atmosphere that supports their talent.
Bonnie, Becky and Ella keep on making new jewelry. We find that our styles are becoming more defined as we develop our skills. Bonnie's love is working in wire. Wire wrapped, wire sculpted and hand made chain have been her focus this year. Becky has found a niche in Vintage style and using brass filigree to make stunning pieces with an antique flair. Ella's watches have been a big hit this year and she continues to love working with turquoise.
Nancy has left us for warmer climates until the Spring. We look forward to working with her again next summer. 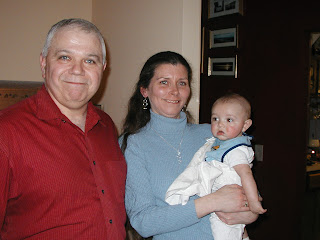 FamiLee news:
On a personal note we had 2 standout events in our lives this year.
In June of this year Fred had his 5 Year checkup with Dr. Cunningham and was given a clean bill of health. He is considered cancer free. Fred has joined the Jewels in their business venture. His wood turned pens, coffee scoops, wine corks, and key chains are in high demand and we sell them as fast as he makes them.
On July 8Th Becky and Dennis gave us a beautiful little boy. Freddy J is named after his Grandfathers Fred and Jimmy and he is doted on by a large and loving family. Becky and Dennis are enjoying being parents and Becky has changed jobs to be able to spend more time at home with the little one. 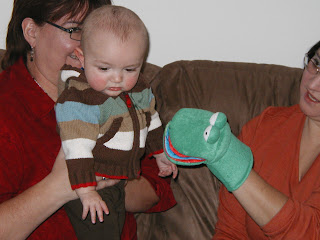 The FamiLee Jewels wish all of you a Happy New Year filled with blessings and good health.
Posted by Happileerving at 7:32 AM No comments: