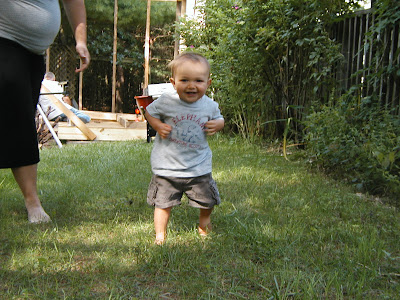 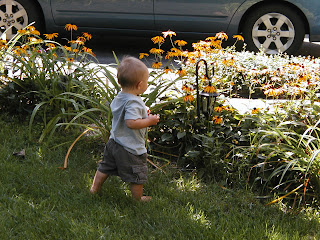 Freddy J. had a play date with Mim and Pip today while Becky went to have another ultrasound. The babies are doing well. They are 1 pound 2 ounces each in size and healthy as can be. For those of you that have not heard they are both boys Liam Patrick and Rory Jacob.
Freddy is very mobile now he walks more that 50% of the time and is very proud of his accomplishment. He says mamama and dadada and says k k k k when the cat walks by. He finds Emily quite amusing and laughs whenever he sees her. The baby gates have been installed and he enjoys his freedom in the rooms we are in.
He had second breakfast with Mim and Pip when he got here. After playing for a while we went for a walk around the block and then had elevenses.
Pip took him down the bike path to the construction site to see the "big trucks" and they came home in time for lunch. 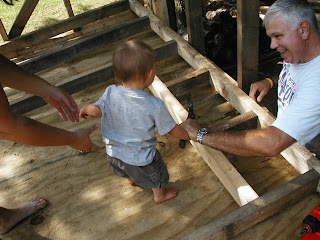 After his nap it was warm enough to play outside in the yard. Walking in the grass was a bit more difficult but he didn't mind the stumbles and spills. He sometimes laughs so hard that it is hard for him to get up again.
He ate leaves and grass, picked Mim's flowers, helped Pip build the new shed and yes tried to swim in the little garden pond. If it was OK for the frog..................and this is the child that acts like you are killing him if you put him in the pool. 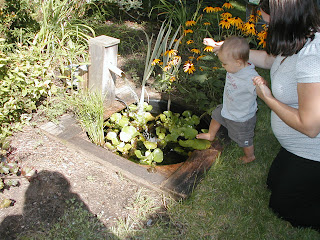 We had a great day.
Freddy and Becky left in the late afternoon.
Mim and Pip took a nap and had late dinner.
Posted by Happileerving at 3:41 PM