The Big Brother Harrassment Has Begun. 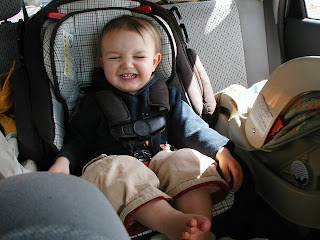 In an example of sibling rivalry at it's finest our adorable little Freddy J has begun picking on his baby brothers.

We took a long car ride this weekend to visit the Massachusetts branch of the FamiLee.
Dennis was not able to make the trip so I rode with Becky and the 3 little ones while Fred and Melissa drove separately.
3 car seats and all the gear that 3 babies require left no room for carpooling!
The car seats just fit across the back seat of their SUV. Freddy, who is 20 months old, rides front facing in the middle with one of his brothers rear facing on either side of him. Liam and Rory are 3 months old. 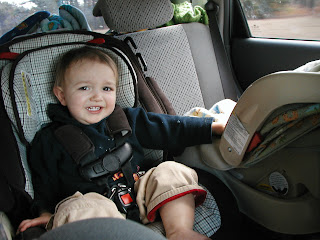 The baby boys usually sleep in the car.
Freddy J doesn't usually sleep but is very content to ride and look out the windows.
3 hours it turns out is his limit.
A little more than half way home he began trying to interact with Liam and Rory.
When they wouldn't wake up to his talking he began holding first Liam's right hand and then Rory's left hand.
They ignored him completely.
Moving on to other pursuits to occupy his busy little mind and fingers he worked on taking of his socks and shoes and throwing them on the floor.
The next time I looked in the back seat it was to find Freddy with one foot full of "stinky toes" in each of his brothers faces. 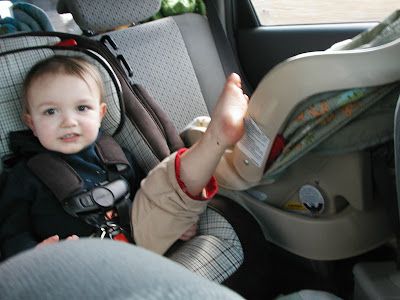 Still they slept!
Some day Liam and Rory will be big enough to gang up on him, but for now "Stinky Toes Rule".
Posted by Happileerving at 5:18 PM