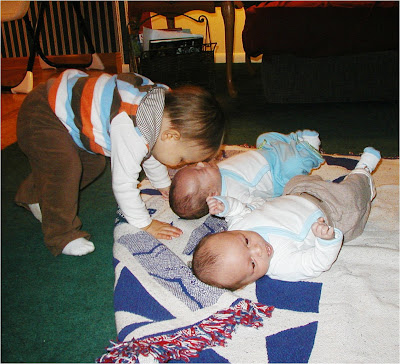 Wednesday Fred and I had the pleasure of the company of Becky and her 3 little boys Freddy J, Liam, and Rory.

Freddy is 18 months old now and Rory and Liam 4 weeks.
The twins are thriving....putting on weight. No more chicken arms and legs for them, they will be able to wear and fit into their cloth diapers soon.
Freddy J. is adjusting to being a "big brother". He alternates between hugging the little boys (he does this by pressing his forehead to theirs)-way too cute! or then throwing blocks at them.
He rocks their swings and bounces their bouncers turning all the lights and sounds on and off for them............To Liam and Rory's credit the only time they object is when he steals their pacifiers.
Wednesday was only the second time our new little Rascal has been exposed to the noise of a houseful of little ones so we kept them separated with baby gates. In a split level house that's a lot of gates! Freddy and Rascal spent a lot of time peering through the gates at one another-at one point Rascal squeezed his top half through part of the gate and was just lying quietly watching the chaos with his big brown eyes. 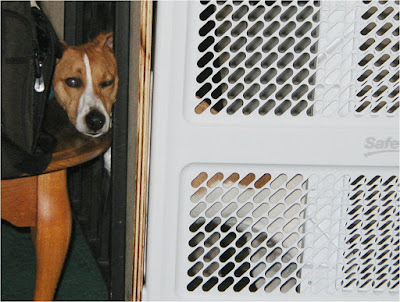 The cats just stayed upstairs.
We made the mistake of giving Freddy a pumpkin muffin with his "second breakfast" he didn't want anything else all day and searched the counter tops repeatedly on tip toe looking for more. For those of you who don't know Freddy personally he eats many short snacks during the day instead of big meals. He is much too busy to sit still long enough. We call it his Hobbit diet. He has breakfast, second breakfast, elevenses, lunch, tea, and sometimes dinner.
Becky is amazing us with her ability to manage the 3 of them at the same time (I had trouble with 2). She has the little guys on the same feeding and changing schedule, and Gripe Water is once again our friend. She keeps Freddy entertained with trips to the play yard in the Mall and to both grandparents houses. I don't think her and Dennis sleep much but we keep telling them that will improve in 18 years or so. I haven't reminded her recently but she never did stop waking up at 2 in the morning, eventually she just stopped waking us up (when she was about 7)!
Hey, maybe living well really is the best revenge.
Posted by Happileerving at 5:42 PM