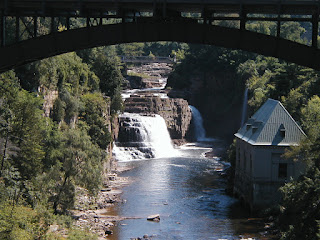 This week Fred and I had the pleasure of spending 3 days in the beautiful Adirondack Mountains of upstate New York.
We had a wonderful stretch of weather with sunshine and daytime highs in the 80's. I think it was the first stretch of 4 days together with no rain since May.
We took off Monday, Labor Day, as everyone else was returning to work and drove to Ausable Chasm.
Our cute little room at the Ausable Chasm Motel, right across the street from the entrance to the cavern, was furnished with white cedar Adirondack furniture and a lamp made out of deer antler. The staff was friendly and helpful and offered us use of the campground facilities during our stay.
Monday we walked the chasm, both rim and lower trails, and ended the tour with a tubing adventure. We had planned to take the 10 person raft ride to avoid getting soaked but the lines were very long so when the attendants asked if any tubers were waiting we jumped line.
It was great. The water in the Battenkill is colder. The ride is slow and meandering for the most part and travels through the rocky chasm with tall rock cliffs on either side. There are 2 places where the water narrows and you have to "shoot the rapids". I liked the ride but it was a little 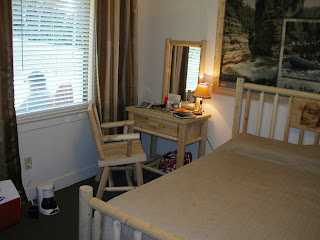 tame for Fred who prefers the speedier white water.
It was great to see the chasm from that vantage point. It gives you an idea of the size of the place when you are looking straight up those walls.
My favorite sighting at the cavern: A honey bee's nest in a hole in a tree. They were very busy and I had only ever seen them in man made hives before. It made me think of Winnie the Pooh and his little black hovering rain cloud.
My second favorite. The most amazingly large spider webs that I have ever seen-on the sunny side rock walls of the cavern while we were tubing. One of the guides told me that they were made by Wolf spiders. ( I was glad NOT to see the spiders.)
Monday night we went to dinner in Plattsburgh, that being the closest place (12 miles) to get a meal that wasn't from a pizza parlor or snack bar.
Tuesday took us to High Falls Gorge, a 4 season recreation area that boasts a 700 foot waterfall and nature trails. The waterfall was very spectacular and the gorge has walkways and bridges that allow you to view it from multiple places. There were some dramatic glacial potholes. We both decided that we would like to go back in the spring when the water is running high. We 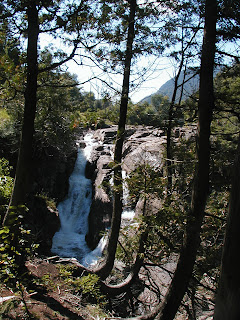 walked the nature trails but were disappointed in the lack of birds and small wildlife. We had expected to see more. Perhaps the larger summer crowds scared them away. We did view 2 wood ducks trying to swim upstream through the rapids while we were eating lunch.
Next stop Whiteface Mountain. The gondolas were closed for the day but we discovered Veterans Memorial Highway that goes to the top of Whiteface. This steep winding road and viewing center were built between 1929 and 1935, by the order of Franklin D. Roosevelt as a public works project to honor veterans of WWII. It is an incredible feat of engineering. The road stops in a paved lot next to a stone castle 270 feet below the top of the mountain. The Castle, made of granite excavated for the road, houses a restaurant, a gift shop and restrooms. After touring the Castle you must walk to the end of the parking lot where a tunnel leads you into the mountain.
424 feet into the mountain! It was deliciously cold and damp, and ended at an elevator which takes you up 27 stories to the weather station at the very top of Whiteface.
The views were spectacular. You could clearly see Marcy and Haystack and all of the other High Peaks, part of Lake Champlain and into Vermont. The top of Whiteface was Fred's favorite part of the trip. I would have enjoyed it more had he not gotten quite so close to the edge!
To descend to the parking lot we chose the nature trail which is only 1/5 of a mile but very steep and rocky. Again no wild life! I brought my binoculars thinking that we would see eagles or hawks but it must have been the wrong time of day. I saw a seagull and a crow! 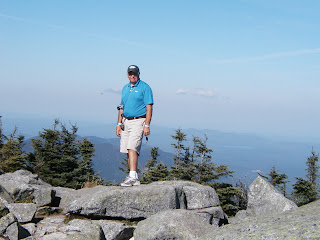 We drove into Lake Placid for a walk about town. It was fun to see the Olympic arena and skating ring and ski jumps but I loved just sitting in the park (in Adirondack chairs of course) looking out at Mirror Lake and watching the swimmers do laps. We had dinner at the Adirondack brewing Company where Fred enjoyed their Autumn lager and a terrific chicken and pasta dish while I had seafood wellington. Both meals were excellent and our server Andrew took very good care of us despite the crowds.
Wednesday found us checking out of our Adirondack room. We stopped at Natural Stone Bridge 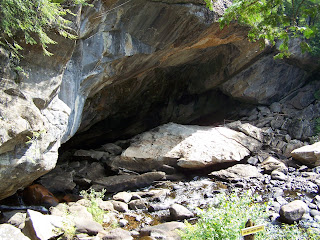 and Caves on our way home. We had a beautiful walk through their trails and looked into the caves. We found out that they have Adventure Tours in the summer months that take you through the caves. While the garnet studded roof of Garnet Cave sounds beautiful I don't think that I will be sharing this adventure with Fred---maybe one of the more daring members of the FamiLee will agree to join him. By the way The Natural Stone Bridge and Caves just happens to have a fantastic rock shop! I found some great pieces of jasper and crystal points that will soon be making an appearance as jewelry.
Wednesday afternoon found us home sweet home, tired and happy, with Bear and Emily curled up near us while we rested sore feet and legs and discussed our favorite parts of the trip.
Posted by Happileerving at 4:43 PM