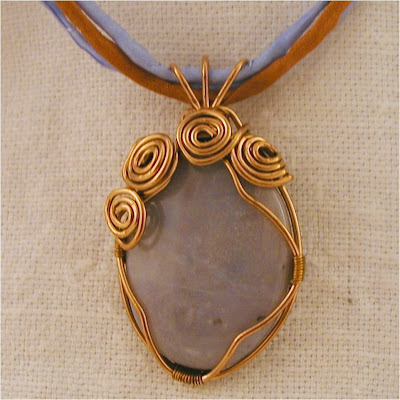 Copper, as bright as a newly minted penny or as verdigrised as the Statue of Liberty, has long been used as an ornamental metal. It enjoyed a popularity in the 1970's when it was valued for it's natural color, earthy quality and it's healing properties. Today's high precious metals prices find it making a comeback in handcrafted as well as manufactured jewelry.
Copper is one of only a few metals that occur naturally as an uncompounded mineral.
Native copper, that which is found not chemically bound to another element is still found in mining regions. These native specimens are not plentiful enough for commercial manufacturing use but are valued as ornamental pieces.
The layer that is formed on copper due to oxidation with exposure to air provides protection against corrosion. This layer begins as a dark copper color and enriches to a deep chocolate brown. Oxidized copper often exhibits a verdigrised patina which is actually a layer of copper carbonate.
In the United States copper is mined in Michigan and Arizona. It also occurs in large quantities in Germany, Russia and Australia.
Coppers discovery is dated at around 9000 BC in the Middle East. The oldest known copper work is a pendant found in what is now Northern Iraq that is dated to 8700 BC.
Prior to that time gold and meteoric iron were probably the only metals used by humans.
The Egyptians used copper widely and discovered that by adding tin to copper, creating bronze, made it easier to cast. By 2500 BC this knowledge had spread to Europe and was so widely used that this era became known as the bronze age. Pre-Colombian Americans used copper for decorative purposes as well as for weapons and armour. This use developed independently in the America's around that same time. 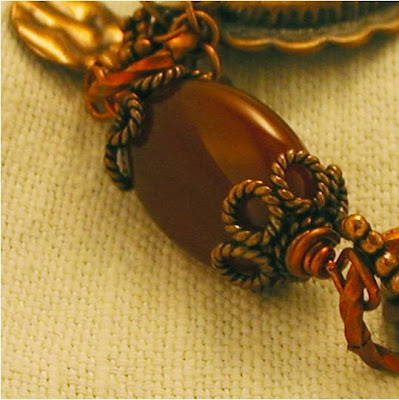 Random Copper Facts:
Copper is associated with the Goddess Venus in mythology.
Copper is a conductor of electrical energy and heat. It is believed by spiritualists that it also conducts spiritual energy between individuals and crystals.
Copper is believed to hold healing powers for the mind and body. It is considered particularly useful in relieving the wearer of joint pain, increasing self esteem and freeing the wearer of mental burdens.
Copper is considered a lucky metal.
Some people experience a green stain on their skin when wearing copper jewelry. This phenomenon is related to the body chemistry of the wearer and is due to the acidity of a persons perspiration. These stains can be washed off with warm soapy water or they can be left on the skin so that the copper may be absorbed overnight.
Copper is bacteriostatic. Doorknobs that contain copper will disinfect themselves of many bacteria. The anti-bacterial properties of copper are effective against many common and antibiotic organisms. Copper tubing used in air conditioning systems has been found to suppress Legionnaire's disease. 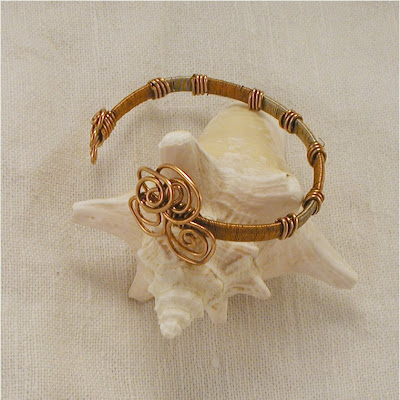 Copper jewelry is quick to tarnish but is easy to clean and restore to it's original appearance.
The following cleaning instructions are recommended by EHow editor Nicole Harris.
Make a solution out of warm water a few drops of lemon or lime juice and a tsp of salt.
Dip the tarnished copper jewelry into this solution and soak for 3 minutes.
Remove the jewelry and rinse thoroughly. Repeat if some tarnish still shows.Use a jewelry polishing cloth to finish cleaning the copper jewelry and to clean around any gemstones. You can also use the polishing cloth to keep the luster bright on your piece between cleanings.
Posted by Happileerving at 7:00 AM